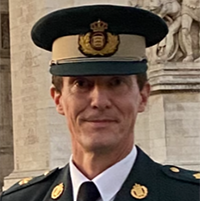 Since September 2020 Prince Joachim is Defence Attaché at the Royal Danish Embassy in Paris.

Prince Joachim started in 1987 as recruit and was appointed sergeant in 1988. In 1989 he became a lieutenant following the reserve officer’s course. The prince served as a platoon commander of a tank squadron from 1989 to 1990.

In 1990, Prince Joachim was appointed first lieutenant of the reserve and in 1992 after completion of advanced training level 1 for officers of the reserve was promoted to captain. From 1996 to 2004, he was a tank squadron commander.

Following promotion to major in 2005 he was attached to Division HQ (Danish Division). Appointed lieutenant colonel of the reserve in 2011, Prince Joachim was designated as head of the Liaison Officers’ Group in Defence Region Southern Denmark.

From November 2015 to June 2019 Prince Joachim served as special advisor to the Danish Chief of Defence in relation to the implementation of the new force concept, focusing on the Home Guard and personnel of the Reserve.

From August 2019 to June 2020 Prince Joachim attended the Center for Advanced Military Studies (CHEM) and the Institute of Advanced Studies in National Defence (IHEDN) with the French Armed Forces in Paris.