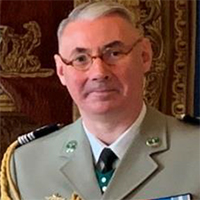 Vincent Samson is a Colonel of French Army. He attended French and Austrian General Staff Courses and holds a PhD in History. He has more than 30 years of experience in the French forces and comes from an operational background as armoured cavalry officer, having been deployed in Sahel and Afghanistan. In his previous position, he was in charge of bilateral cooperation with EU and NATO partners in French Army HQ.